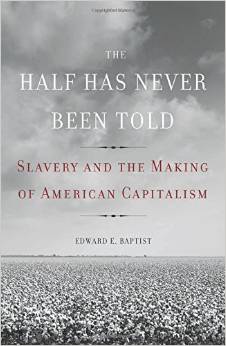 In a few words…

The Half Has Never Been Told by Edward Baptist is a well written book that tells the story of the atrocities of slavery, the forced migration of slaves to Southwest America, the entrepreneurial enterprises that caused the migration, and the financial impact on America’s economy. Edward Baptist provides a fresh perspective, heart-wrenching stories, and interesting facts in our country’s history.

“It was very strange for such white men to sing ‘Oh, Susanna, don’t you cry for me’–a story of an enslaved man trying to find his true love, who’d been taken to New Orleans…”

“The Woolfolks also shipped slaves across the Chesapeake to Baltimore’s Inner Harbor. Employees there offloaded enslaved passengers by night and marched them east up Pratt Street through the heart of today’s downtown Baltimore.”

“[Slaves] hoped that in that future, children or children’s children–their own blood–would be free. For this future to arrive, however, someone had to survive.” (on why slaves who didn’t fight back were just as strong as those who did)